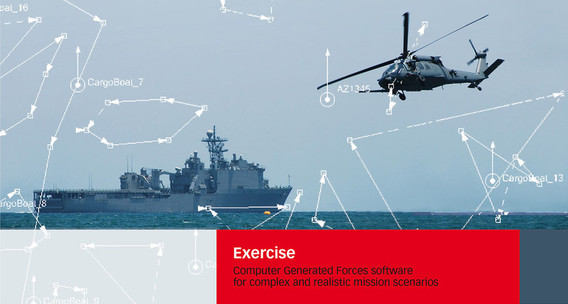 EXERCISE CGF generates dynamic and realistic synthetic scenarios where user-defined entities, such as ships, helicopters and humans, interact between themselves and with the trainees according to user-defined doctrines.

Entities' capabilities, sensors and weapons can be created by the user and controlled through articulated mission doctrines.

In addition, the probabilistic simulation engine enables “What If” analysis, turning EXERCISE CGF into a powerful Decision Support System. In this way it can be used to simulate and optimise operative scenarios like fleet management and sensor positioning. 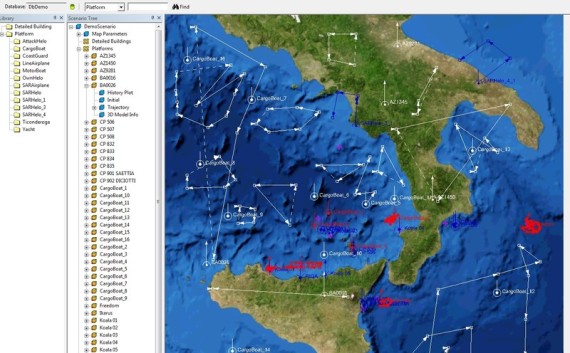 The plug-in based architecture together with the Distributed Interactive Simulation (DIS) and High Level Architecture (HLA) full compatibility allows EXERCISE CGF to be integrated into any distributed training and simulation environment.﻿﻿

EXERCISE CGF has a plug-in based architecture with the following modules:

EXERCISE CGF comes with a special environmental simulator that generates environmental situations with realistic evolutions including the terrain correlation. The weather situation in the operative area evolves during the mission and phenomena like tides, sea currents and winds are  modelled using state of the art algorithms based on fluid mechanics theory and a numerical weather prediction modelling.﻿

Particular attention is given to the ocean dynamics modelling which simulates the water effect (waves and currents) according to the wind situation, the coast profile and the sea bed type. Sensor simulation is fed with the environmental data to provide realistic sensor performances.﻿﻿ 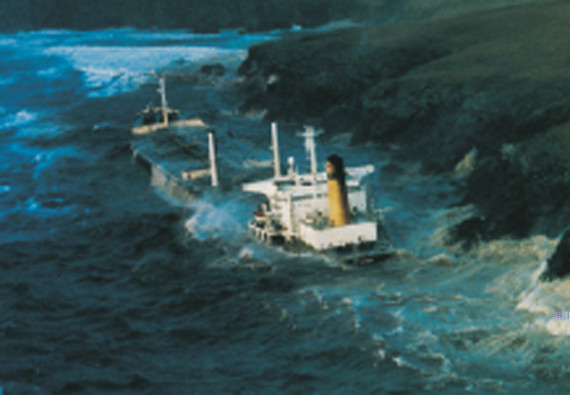 This type of training allows the students to be trained not only on how to use the mission planning specific system but also on how to plan particular missions and how to react quickly to the sudden changes of the operative pictures.﻿ 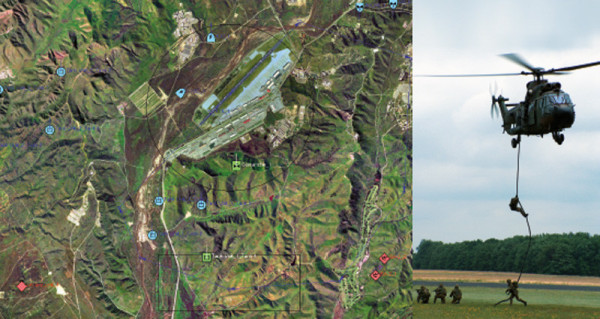 For example the user can ask the system to determine the best positioning of a network of EW sensors to respond to a specific threat over a specific terrain.

At the same time EXERCISE CGF can also simulate different scenarios that will determine the best way to deploy a fleet in order to accomplish a specific mission task.

In a CSAR (Combat Search and Rescue) mission Exercise can determine the best altitude, approach angle and speed to land on the extraction point minimising the detection probability of hostile weapon systems.

EXERCISE CGF is also equipped with high-resolution and high-fidelity floating models which allow the prediction of the drift movement of search objects or pollution spots like oil spills.

Combining this model with the Montecarlo probabilistic analysis EXERCISE CGF can predict the evolution of an emergency scenario and provide the required situation awareness to plan the correct recovery plan.﻿

In accordance with English and Italian law it may be necessary for LOG.IN to obtain an export license from the Export Control Authority.

LOG.IN does not expect any difficulties in obtaining the export license but the final response can only be given from the authority after the system configuration, the content of the service and the End Customer have been clearly identified.